Our peer education project gives young people the opportunity to run their own awareness-raising campaigns, gain new skills, and showcase their talent. 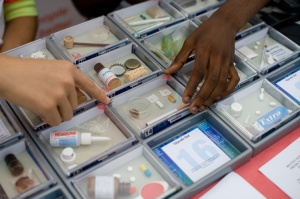 The project runs on a “peer education” model whereby young people educate their peers on drugs and alcohol and mental health awareness. The peer educators take part in accredited training in drugs and alcohol and mental health awareness, identify the aspect they want their campaign to focus on, and decide the message they want to convey. They receive specialist training from film and music tutors to create awareness-raising short films and soundtracks. Youth participation workers support them in designing and delivering awareness-raising workshops to young people in youth clubs and schools across Camden. 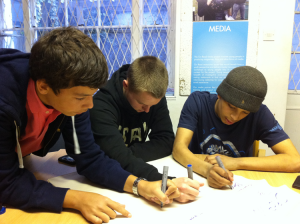 FYA has been delivering peer education on behalf of Camden council since 2005. As well as giving young people a voice on one of the most pressing issues they face, the project gives them the opportunity to gain skills in film production, script writing, composing storyboards, acting, workshop design and delivery, and team work. Participants complete AQAs in Drug Awareness or Mental Health and Film Making, and have the opportunity to take part in our employability workshops and work experience placements.

Between 2017 and 2018 147 young people went through the Peer Education programme and 1049 young people received peer education and training on substance misuse and alcohol or mental health.

I need space!
This film looks at how three young people are living in an overcrowded home with too many occupants. One of the younger siblings got into an accident due to the lack of space. This film highlights how space is key for not only safety but also the way it impacts on young people’s mental health.

What did we learn during the pandemic?
This animation was created in partnership with a group from UCL academy, it discusses some of the different things that these young people have learned during the year. Skills such as using remote learning platforms, staying in touch in different ways, and building good habits during lockdown.

Speak up!
Our young people created this short film about how sometimes men/boys keep things in because of societal expectations at the expense of themselves. This young person is sharing how important it is to speak up and that you shouldn’t be embarrassed to seek help when you need support so things don’t get too much.

Real facts about homelessness
Looking at the statistics about homelessness, these young people have created a film that shows some of the causes of homelessness and how the youth have been affected. The pandemic has left more young people at risk of becoming homeless and the struggles that are faced day-to-day such as abuse, poverty and relationship issues indicate that many are at risk.

No place to go
This film was created in partnership with New Horizon. It looks closely at a young person’s experiences with homelessness and the impact that not having a stable home has had on their mental health. Some of the themes that have been touched upon are health, friendship and community. This short film highlights the importance of feeling a sense of belonging but also a need for young people to have stability in terms of housing.

Pandemic Problems
The pandemic has impacted young people and their mental health. This film looks at how the pandemic has caused many problems and some to feel quite low. This film also highlight some of the things you can do to remain positive during a difficult time.

HS2: Time to Involve Young People We spoke to young people about concerns re #HS2. With 20 years of disruption ahead, it is vital that young people’s concerns and ideas for a better community take centre stage. So far (by January 2019), young people have not even been consulted about HS2. We look forward to working with others to create youth-led opportunities to improve cohesion and community belonging.

Pink Skirts Blue Guns Inspired by spoken word artist, Hollie McNish, these young women explored the topic of the patriarchy and how it affects their lives. They created this film to highlight the negative impact it has on their mental health and want others to be aware – to open conversations and help others to think about their behaviour and in turn make positive changes.

Shout Out Artist Young Remz explores the challenges facing his peers regarding crime and substance misuse in his origonal song.

Drugs and Crime Young people from Regents Park estate explored the subject of crime related to drugs and the consequences. The group felt that this is a common problem in their local area where number of their friends exchange drugs without knowing the seriousness of these offences.

Mental Health and Support Young people from Bengali Worker’s Association worked with Fitzrovia Youth in Action to create a film about how mental health can so easily affect their lives, and what you can do to access support – whether it be your friends, or professional organisations.

Happy – In partnership with Somers Town Youth Centre, and Camden’s Count Me In project, young people from Camden explored what makes them happy after learning about mental health. Now, they are asking you – what makes you happy?

Don’t Give Up Fitzrovia Youth in Action in partnership with WISDM produced a music video to help spread awareness about substance misuse and mental health through a fresh young perspective.

HS2 in CamdenFYA members Frederico and Meki both live in the Regents Park Estate in the London Borough Camden. Work has now started on the HS2 railway which will cut through their estate and mean the loss of homes for many who live there. The council are currently building new flats on top of various open spaces in the estate to help compensate for the loss of housing. Fred and Meki made this short film to share the impact that the HS2 is having on their estate and their lives.

Sticks of Justice This film was made in partnership with Chinese Community centre, exploring substance misuse via the genre of martial arts films.

Talk to a Friend – Peer Support Students from Maria Fidelis School wanted to make a film to show how different issues can impact young people’s mental health and how peer support can be beneficial. They want to encourage people to not be afraid to talk about their feeling with others.

No Laughing Matter ‘Legal Highs’ are substances designed to produce the same, or similar effects, to drugs such as cocaine and ecstasy, but are structurally different enough to avoid being controlled under the Misuse of Drugs Act. Many young people believe they are safe because they are legal, but really you can’t be sure what’s in a ‘legal high’ that you’ve bought, or been given, or what effect it’s likely to have on you.

How you feeling This short quiz game film was produced to help raise awareness about mental health in a fun and creative way.

Trying to Forget Fitzrovia Youth in Action partnered with Dragon Hall Trust to produce a music video to help spread awareness among young people about mental health. Young people wanted to show that things that happen in their life can effect their mental health and this video tells the story of that.

Birthday Surprise Fitzrovia Youth in Action in partnership with Haverstock School produced a short film that looks in to how substance misuse can affect peoples relationship.

Keep Trying Fitzrovia Youth in Action in partnership with WISDM worked with young people to produce a music video to help spread awareness about drugs and alcohol through a fresh young perspective. Young people experiencing stress rely on their friends for help and advice. This video is to encourage young people to support each other when they are going through difficult times.

Just a little Legal High ‘Legal Highs’ are substances designed to produce the same, or similar effects, to drugs such as cocaine and ecstasy, but are structurally different enough to avoid being controlled under the Misuse of Drugs Act. Many young people believe they are safe because they are legal, but really you can’t be sure what’s in a ‘legal high’ that you’ve bought, or been given, or what effect it’s likely to have on you.

Not Alone A young women finds herself in a situation where she is being offered to smoke crack by her boyfriend. Not too sure what to do she thinks ahead on how her life may shape up to be if she take this offer.

It’s Not Too Late A young woman suffering from mental health and substance misuse problems pays a visit to her local counselling support service where she tells the story of her childhood and how she had a very difficult upbringing living in a house with parents who overuse alcohol. Her parents not fulfilling their basic parenting responsibilities, she finds herself taking on parenting roles caring for her younger sibling.

As a result of the traumatic memories she tries to numb her emotional pain and to help overcome insomnia and night terrors she takes sleeping pills and considers drinking alcohol to help make her pain bearable.

Sascha has depression A group of young people explored the issues of depression, such as the stigmas around it and how friendships are affected and how bullying can occur. The young people hope this film will help other young people understand what people with depression might go through, especially at a school age.

Abbey and Muna’s journey through FYA’s Peer Education Programme. FYA has been supported by the London Borough of Camden, Inmidtown and London Youth to work with young people to produce music videos to help spread awareness about drugs and alcohol through a fresh young perspective. In this short film Abbey and Muna talk about their Journey through Fitzrovia Youth in Action’s peer education programme.

We Use You Young people from FYA explored the link between substance misuse, peer pressure and homelessness. Friends can often set a great example and push you to indirectly do better. But, sometimes you can be tempted to indulge in the darker side of things because your friends are doing the same.

Harsh Reality: Young people from Dragon Hall explored the subject of drug dealing and the consequence of getting caught. The group felt that this is a common problem in their local area where number of their friends exchange drugs without knowing the seriousness of these offences.

Down: Young people from Castlehaven Community Association looked at the subject of alcohol abuse. It is a very big problem in Camden and very difficult to tackle as it is legal. The young people hope this film will help other young people think about the pit falls of alcohol abuse and help them stay in control.

Promises: This song is based on young teenagers who fall in to the wrong crowd and as a result they end up on drugs or alcohol and doing bad things. This song specifically talks about a young girl and boy who both find themselves on drugs and would like to find a way out but don’t know how. Young people both wrote the lyrics and made this film.

Fell through the trap: Peer pressure is a common problem when it comes to young people becoming involved in using drugs. So the young people from Granville decided to focus their song on peer pressure and mental health. The young people wanted to create a piece which is both humorous and informative. Young people wrote the lyrics and made the film.

Find your way: Drugs and mental health is a concern as it’s on the increase. Young people from FYA looked at the issue and explored how using drugs affects young people’s life mentally, physically and how it could impact on personal achievements

This site uses Akismet to reduce spam. Learn how your comment data is processed.